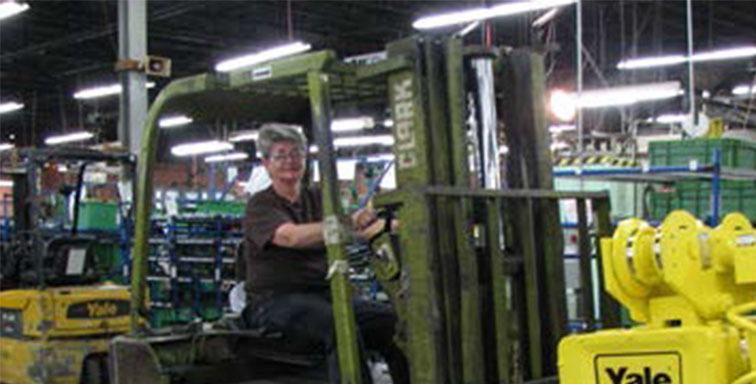 Competing in the world of material handling systems and services requires not only the know-how to produce complex hoists, actuators, and cranes, but also the business processes to ensure consistent quality across a range of products.

It was the movement of new product lines, coupled with the desire to reach broader overseas markets, which prompted a North Carolina-based Columbus McKinnon facility to seek ISO 9000 certification, the international quality standard.

“We’ve been wanting to do this for years; the incoming products were just the catalyst,” says Joe Ombrello, the plant’s general manager. “Having the ISO certification enables us to go to new markets including Asia and Europe.”

The Wadesboro plant specializes in products for industries as diverse as manufacturing and assembly, nuclear power generation, mining, and stage entertainment. Quality has always been at the forefront of Columbus McKinnon’s production philosophy, but the business wanted to enhance its outward recognition on that front, as well as its internal focus on consistency.

“We had some quality systems in place, but some were inadequate,” says Ombrello. “The world’s a very fast changing place. Our competitors are getting better. Positioning yourself as a quality supplier with a certification based on an unbiased measure is now the ticket to play in the game.”

“We started training our leadership in what ISO meant,” says Justin Dawkins, who began at Columbus McKinnon as an engineering student and is now Interim Quality Assurance Manager. “Then we began progressing through the standard, developed a quality manual, and developed training programs and processes within each area.”

“It was really a team effort of all teams and offices,” adds HR Manager and 18-year Columbus McKinnon veteran, Bob Stowe.

Ombrello agrees. “A lot of the people here got a better understanding of how improved formalized training programs and processes enable us to produce quality product on a consistent basis. We must know what training is required and how to complete that training before you put an operator on the job.”

Both corrective and preventative actions will be reviewed regularly to maintain certification. Seeking ISO certification services
from IES was the company’s first choice.

Only three months into the plantwide rollout of ISO 9000, Columbus McKinnon expects to see a 25 percent reduction in the cost of nonconforming material in the long term. The savings could amount to over a quarter of a million dollars, allowing
for reinvestment into the company. Over the past two years, the Wadesboro operation has recorded a 25 percent increase in business.

On Friday, April 13, Columbus McKinnon received a banner from IES in recognition of its ISO achievement in a ceremony on the production floor of its 186,000-square-foot plant. On hand to witness the presentation will be Columbus McKinnon Director of Quality, John Stewart. Ombrello credits the employees for the honor. “It’s really an achievement of people in the plant, so we want to do something for them,” he says. The plant employs nearly 220 employees.

Ombrello, Stowe, and Dawkins all look forward to seeing further benefits from ISO 9000 certification. “Having a quality system that you have confidence in is rewarding,” says Ombrello. “I think it has changed how everybody thinks about their jobs, making us a much more consistent supplier. It demonstrates to customers that we have a quality standard that we’re producing to.”