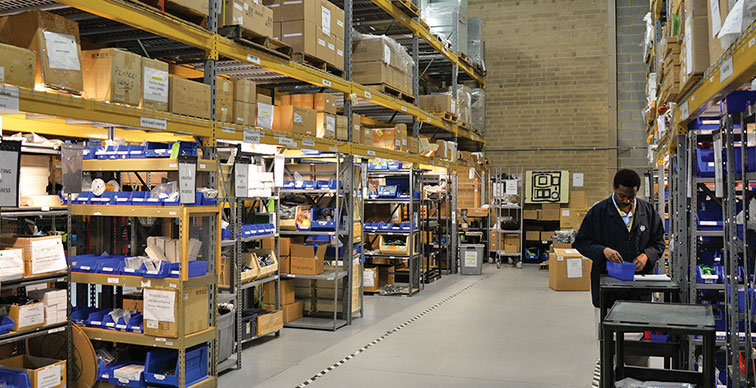 In October 2014, NASCENT Technology LLC, the leading manufacturer of automated gate systems used by the intermodal industry, shipped its 1000th kiosk to customer Norfolk Southern Railroad. NASCENT’s solutions allow cargo to be reviewed and approved from a remote location, cutting inspection times from hours to minutes. As the milestone approached, one might expect NASCENT’s assembly and test floor to be buzzing with the noise and activity of stressed workers. But a surprising sense of calm pervaded the entire facility.

“Some people would come through and say, ‘It looks like you’re not doing anything,’” says Vice President of Product Operations Nigel Davis as he crosses the quiet plant floor. “Well, that’s the way it’s supposed to appear.”

“There’s calmness in order,” adds Gene Beneduce, the IES Regional Manager who worked with NASCENT on its Lean transformation.

When Davis came on board in 2013, the busy company was bursting at the seams with in-process kiosks, many of which were waiting on parts from vendors and taking up a great deal of valuable floor space. Assemblers might walk two miles a day back and forth between their work benches and the areas where parts and tools were stored, adding to the general sense of chaos on the crowded floor.

Davis began by asking Beneduce, with whom he had worked before, to collaborate with the NASCENT team to introduce Lean concepts and discuss how its core principle of eliminating waste could benefit the company.

Steven Forrest, an IES Lean Improvement Specialist, then facilitated two kaizens, a six-day 6S event in the warehouse and shop floor, followed by a three-day work cell and visual factory event. Everything in the facility, from racks to dustpans, was labeled and organized. Shipping and receiving lanes in and out of the inventory control center were established and clearly marked. Sub-assembly and test stations were streamlined into U-shaped production stations, and assembly and test lines were reconfigured into one-piece flow work cells where workers could easily reach 6S inventory and tool stations. Standard work procedures were developed, in-process and strategic Kanban stations set, Andon lights added and Takt boards set up to track production and demand, establishing baselines for future use.

Output immediately increased from one to three kiosks per operator per shift, and additional lines for new NASCENT products were installed without adding new space.

By more efficiently using its resources, NASCENT is now able to easily scale production upward to meet its customers’ needs.

“We build them, we ship them,” says Davis. “Our current pace will eclipse last year’s total production in the third quarter alone.”

“I could not be more pleased with the NASCENT team,” continues Davis. “Every single person, from the CEO down, has embraced Lean and driven toward continuous improvement from the inception of the transformation. This is a journey, not a destination,” he concludes.

“We’re always trying to build on new technologies… stay at the front of the pack,” affirms Teti. As NASCENT eyes new consumer markets opening up in South America, its commitment to adopting world-class practices should help it keep its leading edge.

“NASCENT is a small company that thinks and acts like a big company,” says Beneduce.