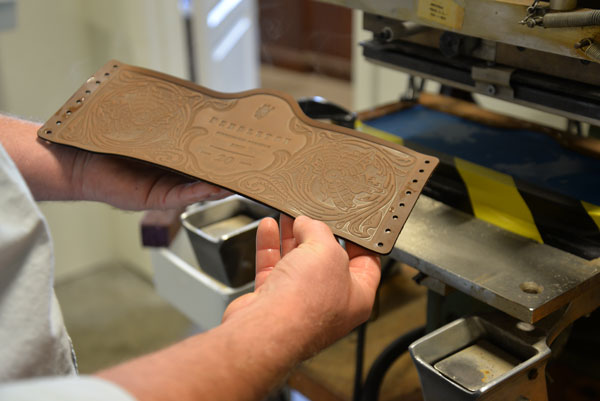 As the craft brewery market has boomed, the star of Oowee Products has risen. The small company is headquartered in Asheville, the mountain town that won the moniker “Beer City USA” back in 2009—the same year that Oowee incorporated. Oowee began making small batches of premium leather beverage accessories, like hand-stitched sleeves and hand-riveted coasters, to serve those local craft breweries and their customers. Now, the company also manufactures large runs of branded beverage accessories for breweries and distillers across the US, and uses Lean tools to reduce waste and streamline operations.

A Manufacturing Extension Partnership initiative designed to reach very small manufacturers—defined as having fewer than 20 employees—allowed founder Gabriel Hargett to take an IES-led Lean workshop in 2015. Hargett admits that he was, at first, skeptical about the course. “I wasn’t really worried about us being inefficient,” he says, “but we have become much more efficient.” He points to the way that Oowee now maximizes its material resources as an example; initially, he purchased his leather solely as remnants from lace and boot manufacturers, but as demand for the products grew, he began purchasing whole blocks of hides in custom runs and colors. The oddshaped leather scraps that are left after a pattern is cut are either thrown away, saved for reuse, or resold; the more that can be reused, the higher the profit margin. “Branding really intricate logos on leather is what we do best,” says Hargett. “At the simplest level, we buy leather and add value to it by cutting, branding and stitching it. Whether we’re adding value to one pound or ten pounds makes a huge difference.”

Benefiting from waste reduction is typical after applying Lean, but Oowee has seen more unorthodox outcomes, too.

In 2011, Oowee partnered with the Autism Society of America, employing adults on the autism spectrum to produce its intricately stitched beverage sleeves. Lean’s emphasis on work standardization and visual controls—including diagramming, color coding, and materials organization—have been invaluable as reference materials for the six autistic adults working in Oowee’s sewing room.

Hargett reviews a particularly tricky lacing pattern with one worker, pointing to each step of the instructional diagram at the man’s station; the worker quickly gets the hang of it, and successfully recreates the pattern on the leather sleeve that he’s assembling. He and Hargett high five, smiling.

The company has just moved into a new space, which is 700 square feet larger than their last. Hargett is currently hiring three new employees, as well: two production workers and one salesperson. “In two years, I hope that we’re even busier, that we have more autistic adults working,” he says. “Lean has helped us to know how to scale up—a couple of years ago, we would turn down orders because we just couldn’t meet deadlines for very large orders.”

As Oowee’s staff effortlessly turns out piece after piece of beautiful branded leather for a 14,000-piece order, it’s clear that they’ve turned the corner.