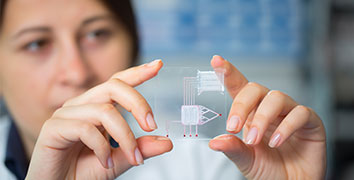 Agile Sciences found its perfect starter home in the Technology Incubator at North Carolina State University. The Incubator is located in the heart of Centennial Campus, alongside the 70+ private, government and non-profit organizations that reside among NC State’s research centers, institutes and laboratories.

Agile Sciences was founded in 2007 by two NC State professors who believed certain molecules produced by sea sponges could be applied wherever biofilms—sticky films of bacteria on surfaces—cause problems; on the hulls of ships, for example, where build-up can cause drag and fuel inefficiency, or in the lungs of patients with chronic conditions like cystic fibrosis.

Agile Sciences moved into the Technology Incubator in 2010 and occupied several of the space’s state-of-the-art wet labs. Inside the unique turnkey environment of the Incubator, the company’s cutting-edge research and
development thrived.

“It was like walking into a fully furnished apartment,” recalls Agile Sciences’ Director of Research, Angela Pollard. “When you have few people and a lot of responsibilities to care of, anything you can offload to others is a huge advantage.”

Because no time or resources were wasted building or maintaining the countless moving pieces of a laboratory, the company’s scientists were immediately able to begin work demonstrating its proof of concept.

Another advantage of the Incubator, according to Pollard, is the wealth of experienced consultants and research contractors who share the same area code.

“There is an abundance of really fantastic consultants in the area,” she says. “The fact that they’re local and available to us at all times has been huge for our program.”

Another Technology Incubator client, data analytics company Arcametrics, found the talent that it needed even closer to home, in the university’s Department of Computer Science; Arcametrics hired two masters-level students and retained them both through most of their program.

Paolo DiVincenzo was CEO of the company during its time at the Incubator.

“We realized we needed a lot of programming work, and we thought being on the university campus was a great way of getting at highly skilled developers at an affordable rate,” he says. “It worked out fabulously.”

Arcametrics found additional value in the technical facilities to which it had access as an NC State affiliate.

“We hosted the entire Arcametrics platform there,” says DiVincenzo, referring to the 2000-square foot Open Systems Collaboration and Research (OSCAR) Lab. “We used their bandwidth, which was huge— that would have cost us a lot more elsewhere.”

Agile Sciences eventually moved into a larger, dedicated space elsewhere on the NC State campus, to accommodate more administrative staff. Arcametrics also relocated to a larger private office after being acquired by Adroit Digital, a marketing technology firm with locations across the US.

“We specialize in helping our clients develop into profitable, high-growth businesses,” says Technology Incubator Director Ashley Hudson. “It’s exciting to see entrepreneurs enter the program and take advantage of all the partnerships and resources offered to them— each company is unique and leverages the program differently, based on their particular needs. It’s extremely rewarding to play a role in that process and watch them flourish.”